Following on from the ‘first stage’ reform that was implemented at the end of March 2016 the Government has been consulting on the second stage of ‘a reformed and refocused scheme’ for the RHI since March of this year. The response to this consultation was published by BEIS last week.

In her ministerial foreword to the response Baroness Neville-Rolfe DBE CMG reminds us that ‘producing heat accounts for almost half of UK energy use and a third of UK carbon emissions,’ a statement that impressively sets the scene for the importance of this release. It’s no secret this response had been expected for some weeks. We are also reminded in the foreword that it is ‘vital that the scheme delivers value for money for taxpayers and supports the development of technologies that will be important for the long term.’

BEIS’ response to this consultation has delivered some positive results for the sector and focuses on the long-term decarbonisation of the UK through supporting supply chain growth and challenging the market to deliver, however this is tempered with the need to ensure value for money and consumer protection.

Nova Power have summarised the key points for both the Non-Domestic and Domestic schemes taken from the BEIS documents: 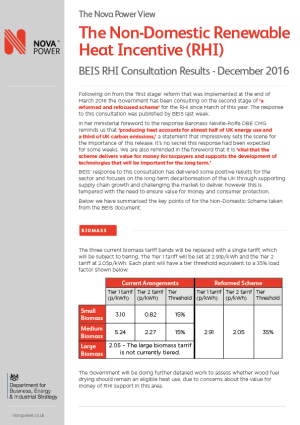 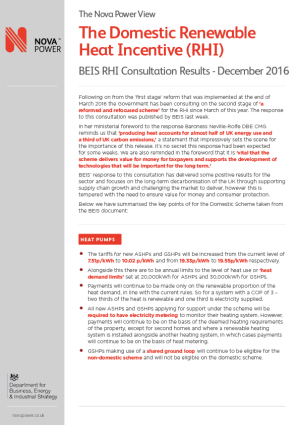